In collaboration with basketball coach Connor Jean and Reid Ouse

1. Rest!  “I find vital to a player’s success is their ability to rest. While I do hold more of an “old-school” mentality when it comes to hard work and fighting through adversity, it is also very important to understand when you need a break, not only physically but mentally. As a former college coach, we mandated that players were not allowed to touch a basketball for 10-14 days after the season. We understood the importance of taking a break to let your body physically recover, but we also stressed the importance of being mentally rested. We wanted to get the most out of our players, and we knew that if we told them they couldn’t play basketball for two weeks they would be hungry to get in the gym when it was time. That led to healthier players and better workouts” @coachouse

While this may sound more relevant to professional athletes, it is indeed relevant to younger ballers as well. Kids have a tight schedule from waking up early to go to school, doing their homework afterward and attending the basketball practice in the evening. It is crucial to not overload our kids with multiple tasks and a short nap before the practice can be a game-changer.

Furthermore, proper sleep boosts the child’s overall health and thus their performance on the court. To explain the importance of sleep we need to look at some scientific facts like the growth hormone.

The human growth hormone is an important part of the body’s endocrine system. Thanks to the growth hormone, sleep and exercise are inextricably linked to each other. This hormone is especially active during the growing child’s maturation.

HGH is released by the brain into the bloodstream during sleep, and its release is part of the repair and restoration function of sleep. It is one of the most important physiological factors that make kids get taller and grow. In addition, the human growth hormone promotes a healthy metabolism, it enhances your physical performance, and may even help you live longer.

Experts claim that approximately 75 percent of HGH is released during sleep. The fact speaks for itself so do make sure that your child gets at least good 8 hours sleep (preferably even longer!)

2. Maintain a good level of fitness. In addition to following a consistent sleep schedule, your kids should also exercise regularly in order to increase HGH release. Pulses of HGH are also released during the day and any exercise promotes quality sleep by expending your energy.

We suggest your kids stay in shape during the offseason. Basketball injury prevention begins in the off-season!

For most sports league athletes, this preseason training may be hard because of time constraints. But, even minor conditioning is better than none at all. Getting ready in advance is a key prevention factor.

“The weight room is so crucial for any sport to help you strengthen weak parts in your body. Over the years you put so much stress on the body and the joints that you want to do low impact things to train. A cycling class, water aerobics, yoga, swimming..etc. don’t always just be Attacking the weights and putting more strain on those joints!” @coachouse

3. Forget about junk food / Encourage Healthy food. The human growth hormone is also linked to what we eat. As for diet, you should think of HGH and sugar as the opposite. The higher the intake of high-sugar food and beverages, the lower the HGH levels. Kids should avoid foods high in sugar generally, especially before bed, if they want to avoid interrupting the natural production of HGH during sleep.

A healthy diet will also give them more energy throughout the day and decrease the likelihood of getting injured when playing basketball. What can you as a parent do to help your kids stay healthy is to limit sweets and junk food. Make sure your kid’s lunch box doesn’t have any high sugar foods.

4. Hydrate. If you have not had enough fluids, your body will not be able to effectively cool itself through sweat and evaporation. A general recommendation is to drink 24 ounces of non-caffeinated fluid 2 hours before exercise. While you are exercising, break for an 8 oz. cup of water every 20 minutes.

“EVERY PLAYER should carry around a 1 gallon jug of water. Does it look awkward? Possibly. But you need to stay hydrated and most players do not drink even close to enough water. Carrying around a 20 oz bottle of water is fine, but are you really going to fill that thing up 6 times per day? Only you know the answer to that. Personally, I use a gallon jug of water and take 10 large gulps every time I take a drink. You would be surprised how much water you could drink every day and how much better your body will feel when you are truly hydrated.” @coachouse

5.Warm-up and stretch. To prevent joint injury. Any athlete, especially children must spend time warming up appropriately and stretch muscles. Warming up allows the body the time it needs to be able to respond to nerve signals for quick and efficient actions. This is imperative for basketball, as it involves quick, high-intensity actions.

“The first major mistake that I see players make is not warming up properly. To be honest, I see a ton of players not even warm up at all. Think about the first paragraph. We are asking our body to be able to do a bunch of difficult and explosive movements, and you’re going to repay your body by not warming up? Yikes!

The first thing you should do is learn how to warm up appropriately. Personally, I am not a certified sports performance coach so I try to stay away from advising players on exactly what to do for their warm ups. With that being said, I have sought out various professionals in the industry that have helped me develop a plan.

Basketball involves playing at a variety of different levels. Sometimes I am straight up and down and sometimes I have to play low. All of these involve your hips. That is why I spend around 5-10 minutes getting my hips and glutes ready to go. There are several ways that you can do this, but I would encourage every basketball player to have a foam roller to lacrosse ball with them all the time. Those are two great tools to help you get loosened up and ready for competition”.

We cannot stress this enough how important it is to warm up and it is your job as a parent to remind this to your kids.

“Acute injuries are inevitable, but you want to try to reduce your risk for these injuries which is why always wear protective pads while playing” - Connor Jean 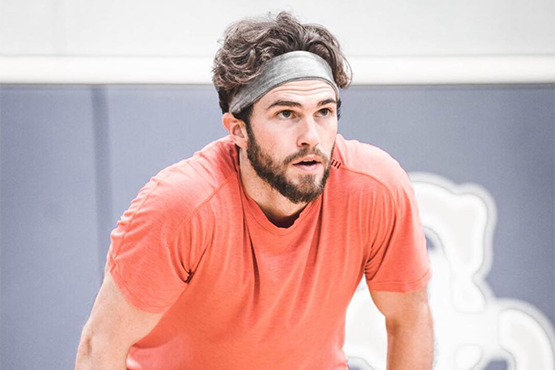 Basketball as a sport through the years has evolved. Today it's high-scoring, high-speed, and the intensely physical sport. As the game has become professionalized, with eight-figure salaries on offer, the athletes playing basketball have become larger, faster and stronger. And even with ever-improving training regimens and state-of-the-art facilities, injuries are common: occurring at a rate of 6-14 injuries per 1,000 hours played.

At BLINDSAVE, we have done everything to ensure that your child will get the most comfortable and most durable basketball protection gear out there. We have not only created the lightest protective wear, but also made sure that it its by at least 20% more durable than any of our competitors!

What are other parents saying about BLINDSAVE....

My son loves his blindsaves. He never has to keep pulling them up like his McDavids. His knee measurement was right at 13.5 inches so we opted for the mediums which fit perfectly. Also, he loves how the knee pad will mold around his knee as his body temperature heats up the knee pad. Although more expensive than the McDavids, the quality is much higher. Will definitely be buying another pair down the road when these wear out, whenever that is.

Best knee pads ever, much more better than MC DAVID. Protection is very good, they are really heavy-duty knee pads, after two months they look like new. Blindsave knee pads are longer below and over the knee and it makes them much more suitable than McDavid. After you put them you don't have to correct it all the time - they fit well. Really comfortable, my daughter likes them very much. The next one will be also Blindsave.

My boy loves the knee pad! They are very comfortable. The padding is thick enough to protect his knee well. Money well spent!

My 15 year old son seemed to blow through other basketball knee pads quickly. We would need to purchase several pair of other brands to get through a season. I saw these displayed at a tournament, but hesitated at the price. After buying yet another less expensive pair, I decided to place an order. Great decision! He likes the fit better than the other brands as they don’t slip as much and they are way tougher. We only ordered one pair initially to make sure the fit was correct. The sizing chart was accurate, so we ordered second pair for him in a different colour and now some for my daughter.